Difference between revisions of "His Weight, In Gold (Creem 1986)" 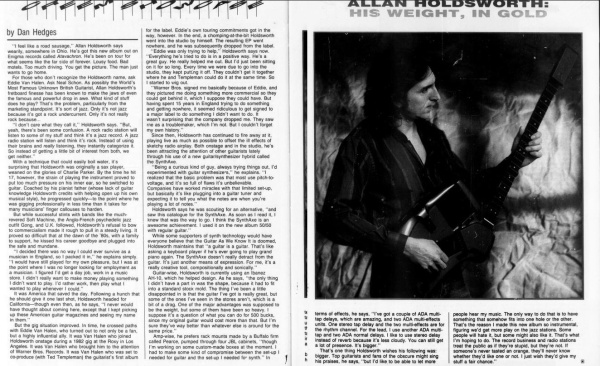 His Weight, In Gold

"I feel like a road sausage,"Allan Holdsworth says wearily, somewhere in Ohio. He's got this new album out on Enigma records called Atavachron. He's been on tour for what seems like the far side of forever. Lousy food. Bad motels. Too much driving. You get the picture. The man just wants to go home.

For those who don't recognize the Holdsworth name, ask Eddie Van Halen. Ask Neal Schon. As possibly the World's Most Famous Unknown British Guitarist, Allan Holdsworth's fretboard finesse has been known to make the jaws of even the famous and powerful drop in awe. What kind of stuff does he play? That's the problem, particularly from the marketing standpoint. It's sort of jazz. Only it's not jazz because it's got a rock undercurrent. Only it's not really rock because…

"I don't care what they call it," Holdsworth says. "But, yeah, there's been some confusion. A rock radio station will listen to some of my stuft and think it's a jazz record. A jazz radio station will listen and think it's rock. Instead of using their brains and really listening, they instantly categorize it. So instead of getting a little bit of interest from both, we get neither."

With a technique that could easily boil water, it's surprising that Holdsworth was originally a sax player, weaned on the glories of Charlie Parker. By the time he hit 17, however, the strain of playing the instrument proved to put too much pressure on his inner ear, so he switched to guitar. Coached by his pianist father (whose lack of guitar knowledge Holdsworth credits with helping open up his own musical style), he progressed quickly-to the point where he was gigging professionally in less time than it takes for many musicians' finger callouses to harden.

But while successful stints with bands like the much revered Soft Machine, the Anglo-French psychedelic jazz outfit Gong, and U.K. followed, Holdsworth's refusal to bow to commercialism made it rough to pull in a steady living. It proved so difficult that at the dawn of the '80s, with a family to support, he kissed his career goodbye and plugged into the safe and mundane.

"I decided there was no way I could ever survive as a musician in England, so I packed it in," he explains simply "I would have still played for my own pleasure, but I was at the point where I was no longer looking for employment as a musician. I figured I'd get a day job, work in a music store. I didn't really want to make money playing something I didn't want to play. I'd rather work, then play what I wanted to play whenever I could."

It was America that saved the day. Following a hunch that he should give it one last shot, Holdsworth headed for California-though even then, as he says, "I never would have thought about coming here, except that I kept picking up these American guitar magazines and seeing my name in them."

But the gig situation improved. In time, he crossed paths with Eddie Van Halen, who turned out to not only be a fan, but a highly influential ally. It was Van Halen who joined Holdsworth onstage during a 1982 gig at the Roxy in Los Angeles. It was Van Halen who brought him to the attention of Warner Bros. Records. It was Van Halen who was set to Co-produce (with Ted Templeman) the guitarist's first album for the label. Eddie's own touring commitments got in the way, however. In the end, a chomping-at-the-bit Holdsworth went into the studio by himself. The resulting EP went nowhere, and he was subsequently dropped from the label.

"Eddie was only trying to help." Holdsworth says now. "Everything he's tried to do is in a positive way. He's a great guy. He really helped me out. But I'd just been sitting on it for so long. Every time we were due to go into the studio, they kept putting it off. They couldn't get it together where he and Templeman could do it at the same time. So I started to wig out."

"Warner Bros. signed me basically because of Eddie, and they pictured me doing something more commercial so they could get behind it, which I suppose they could have. But having spent 15 years in England trying to do something and getting nowhere, it seemed ridiculous to get signed to a major label to do something I didn't want to do. It wasn't surprising that the company dropped me. They saw me as a troublemaker, which I'm not. But I couldn't forget my own history."

Since then, Holdsworth has continued to fire away at it, playing live as much as possible to offset the ill effects of sketchy radio airplay. Both onstage and in the studio, he's been attracting the attention of other guitarists lately through his use of a new guitar/synthesizer hybrid called the SynthAxe.

"Being a curious kind of guy, always trying things out, I'd experimented with guitar synthesizers," he explains. "I realized that the basic problem was that most use pitch-to-voltage, and it's so full of flaws it's unbelievable. Companies have worked miracles with that limited set-up. but basically it's like plugging into a guitar tuner and expecting it to tell you what the notes are when you're playing a lot of notes."

Holdsworth says he was scouting for an alternative, and saw this catalogue for the SynthAxe. As soon as I read it,1 knew that was the way to go. I think the SynthAxe is an awesome achievement. I used it on the new album 50/50 with regular guitar."

While some supporters of synth technology would have everyone believe that the Guitar As We Know It is doomed, Holdsworth maintains that a guitar is a guitar. That's like asking a keyboard player if he's ever going to play grand piano again. The SynthAxe doesn't really detract from the guitar. It's just another means of expression. For me, it's a really creative tool, compositionally and sonically."

Guitar-wise, Holdsworth is currently using an Ibanez AH-10, which he helped design. As he says, "the only thing I didn't have a part in was the shape, because it had to fit into a standard stock mold. The thing I've been a little disappointed in is that the guitar I've got is really great, but some of the ones I've seen in the stores aren't, which is a bit of a drag. One of the major advantages was supposed to be the weight, but some of them have been so heavy. I suppose it's a question of what you can do for 500 bucks, since my original guitar would cost more than that. But I'm sure they've way better than whatever else is around for the same price."

Amp-wise, he prefers rack mounts made by a Buffalo firm called Pearce, pumped through four JBL cabinets, "though I'm working on some custom-made boxes at the moment. I had to make some kind of compromise between the set-up needed for guitar and the set-up I needed for synth." In terms of effects, he says, "I've got a couple of ADA multitap delays, which are amazing, and two ADA multi-effects units. One stereo tap delay and the two multi-effects are for the rhythm channel. For the lead, I use another ADA multitap and two ADA normal delays. I like to use stereo delay instead of reverb because it's less cloudy. You can still get a lot of presence. It's bigger."

That's one thing Holdsworth wishes his following was: bigger. Top guitarists and fans of the obscure might sing his praises, he says, "but I'd like to be able to let more people hear my music. The only way to do that is to have something that somehow fits into one hole or the other. That's the reason I made this new album so instrumental, figuring we'd get more play on the jazz stations. Some people will hate it, but some might also like it. That's what I'm hoping to do. The record business and radio stations treat the public as if they're stupid, but they're not. If someone's never tasted an orange, they'll never know whether they'd like one or not. I just wish they'd give my stuff a fair chance."