A chat with Holdsworth (Michigan Daily 1983) 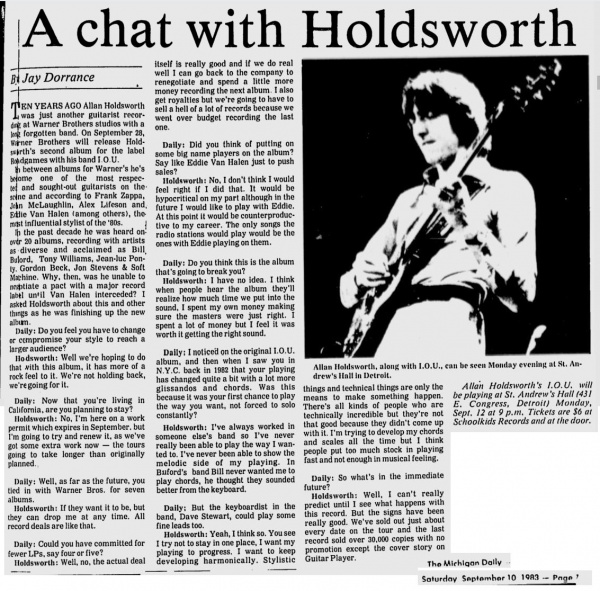 A chat with Holdsworth

TEN YEARS AGO Allan Holdsworth was just another guitarist recording at Warner Brothers studios with a long forgotten band. On September 28, Warner Brothers will release Holdsworth's second album for the label, “Road Games”, with his band I.O.U.

In between albums for Warner's he's become one of the most respected and sought-out guitarists on the scene and according to Frank Zappa, John McLaughlin, Alex Lifeson and, Eddie Van Halen (among others), the most influential stylist of the '80s.

In the past decade he was heard on over 20 albums, recording with artists as diverse and acclaimed as Bill Buford, Tony Williams, Jean-Luc Ponty, Gordon Beck, Jon Stevens & Soft Machine. Why, then, was he unable to negotiate a pact with a major record label until Van Halen interceded? I asked Holdsworth about this and other things as he was finishing up the new album.

Daily: Do you feel you have to change or compromise your style to reach a larger audience?

Holdsworth: Well we're hoping to do that with this album, it has more of a rock feel to it. We're not holding back, we're going for it.

Daily: Now that you're living in California, are you planning to stay?

Holdsworth: No, I'm here on a work permit which expires in September. but I'm going to try and renew it, as we've got some extra work now - the tours going to take longer than originally planned.

Daily: Well, as far as the future, you tied in with Warner Bros. for seven albums.

Holdsworth: If they want it to be, but they can drop me at any time. All record deals are like that.

Daily: Could you have committed for fewer LPs, say four or five?

Holdsworth: Well, no, the actual deal itself is really good and if we do real well I can go back to the company to renegotiate and spend a little more money recording the next album. I also get royalties but we're going to have to sell a hell of a lot of records because we went over budget recording the last one.

Daily: Did you think of putting on some big name players on the album? Say like Eddie Van Halen just to push sales?

Holdsworth: No, I don't think I would feel right if I did that. It would be hypocritical on my part although in the future I would like to play with Eddie. At this point it would be counterproductive to my career. The only songs the radio stations would play would be the ones with Eddie playing on them.

Daily: Do you think this is the album that's going to break you?

Holdsworth: I have no idea. I think when people hear the album they'll realize how much time we put into the sound, I spent my own money making sure the masters were just right. I spent a lot of money but I feel it was worth it getting the right sound.

Daily: I noticed on the original I.O.U. album, and then when I saw you in N.Y.C. back in 1982 that your playing has changed quite a bit with a lot more glissandos and chords. Was this because it was your first chance to play the way you want, not forced to solo constantly?

Holdsworth: I've always worked in someone else's band so I've never really been able to play the way I wanted to. I've never been able to show the melodic side of my playing. In Buford's band Bill never wanted me to play chords, he thought they sounded better from the keyboard.

Daily: But the keyboardist in the band, Dave Stewart, could play some fine leads too.

Holdsworth: Yeah, I think so. You see I try not to stay in one place, I want my playing to progress. I want to keep developing harmonically. Stylistic things and technical things are only the means to make something happen. There's all kinds of people who are technically incredible but they're not that good because they didn't come up with it. I'm trying to develop my chords and scales all the time but I think people put too much stock in playing fast and not enough in musical feeling.

Daily: So what's in the immediate future?

Holdsworth: Well, I can't really predict until I see what happens with this record. But the signs have been really good. We've sold out just about every date on the tour and the last record sold over 30,000 copies with no promotion except the cover story on Guitar Player.