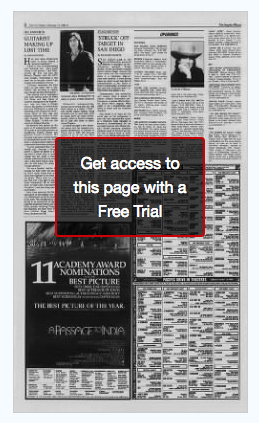 How does Allan Holdsworth react to being labeled a "guitarist's guitarist"?

"I find it sort of embarrassing and flattering, but I don't know which is the greater," said Holdsworth, 36, who will play the Beverly Theatre with his I.O.U. band tonight. "Sometimes it can upset me to the point where I get onstage and completely dry up.

"I always remember the time when no one knew who I was. Nobody had anything to expect, and I just got up and played guitar."

That playing was so impressive that such famous peers as Eddie Van Halen and Neal Schon of Journey championed the Englishman, who now lives in Orange County. His speedy, inventive style also won Holdsworth a rabid cult following, even though the adventurous blend of rock, jazz and classical elements doesn't fit most radio formats. His latest album, "Metal Fatigue," is due out this month on Enigma Records.

Holdsworth first picked up the guitar at 17, soaking up the recorded sounds of such jazz pioneers as saxophonist Charlie Parker and guitarist Charlie Christian. His principal instructor was his father, an accomplished pianist who abandoned a musical career rather than compromise his artistic principles.

"I never understood that," Holdsworth said, "because I thought surely it would be better to play any kind of music than to work a regular day job. After a while I came to understand what he meant. I got to that point where I said, 'If I can't do this music, I'd rather go work in a factory.'

"He was a fantastic teacher, but because he didn't play the guitar, he didn't really know how anything was supposed to be done on the guitar. There were no rules, and that way I was able to absorb music irrespective of an instrument. It wasn't like I was learning the guitar; I was just being opened up to music."

After three years on the British equivalent of the Holiday Inn circuit, Holdsworth moved to London in the early '70s. He played out the decade in an assortment of highly regarded progressive rock and jazz fusion groups, including Tempest, Soft Machine, the New Tony Williams Lifetime, Gong, Jean-Luc Ponty, Bruford and U.K.

Holdsworth's underground following was so strong that his 1981 debut album as a leader, "I.O.U.," sold 35,000 copies despite being available only by mail order. Still, he nearly gave up music professionally when he found it impossible to book live dates in punk-crazed England.

A friend arranged a few American shows, and the response persuaded Holdsworth to relocate in Tustin late in 1981. His fortunes seemed to be on the rise when Eddie Van Halen joined him onstage at a 1982 Roxy date and later persuaded Warner Bros. to sign Holdsworth.

But things didn't work out between Holdsworth and his producing team of Van Halen and Ted Templeman on the first album of a projected two-LP deal, and the guitarist ended up in contractual limbo for two years, with only 1983's "Road Games" EP to show for his efforts.

Holdsworth plans on making up for lost time in 1985. The "Metal Fatigue" album is the opening salvo in a blitz that calls for Enigma to re-release the "I.O.U." album. After a Japanese tour next month, he plans to record another album with an expanded lineup.

"I'm just trying to do the same thing I set out to do--become a better player and musician, and develop the music," Holdsworth concluded. "I'm lucky in that I'm still actually a musician and not working in a factory, but it gets close sometimes. We've reached more people, but it's still scuffling to pay the rent every month."

(Thanks to Randy Lewis!)