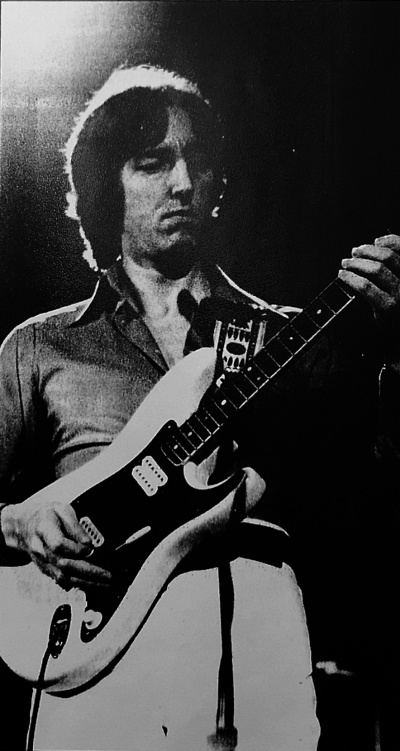 Over the years many musicians have been accused of being 'before their time'. Lifetime were one such band of whom this was certainly true, and Jimi Hendrix also, but the public soon caught up with him. These days the current holder of that title seems to be the unique Alan Holdsworth. By right his main problem should be how to spend his fortune; but, due to divine intervention, a distinct lack of hit singles in his repertoire, and no desire whatsoever to churn out three chords for the rest of his natural, not to mention the magnanimous lack of interest on behalf of all the major U.K. record companies, this is not the case. He is held in very high esteem by the business, but so far the old school tie just doesn't seem to help. Alan Holdsworth 'J'accuse'.

What is the current state of play?

ALAN: Now things are starting to look good. I've spent a lot of time hearing people with people hearing me, on opposite sides of the wall. Can I get through that bloody wall? Right now I'm just about to record an album with my new band, my first album in two years. The band could be very loosely described as a modern power trio, but not quite like anything you'd expect.

That sounds like a tricky one for the record co's.

ALAN: They've been no help except for Paul at Virgin. I have considered jumping out of a window but it wouldn't help my wife and little girl would it? I was going to take a factory job which I'd prefer to a gig at Mecca, though I did three years in a Mecca band, practised during the day.

ALAN: I don't read so I've always avoided sessions. I know that not all session players read and I could probably do the job but other people do it better than me, and they enjoy it. I wouldn't because I never have liked impersonations. The point for me is not to absorb another player's licks but his general quality. Too many people miss that point. It's the quality not the licks. If a guitar player is known for his licks that are instantly recognisable then he isn't making any progress and it doesn't interest me. More important is that line of quality, and if it's there, absorb it, not the superficial stuff. When I started playing 15 years ago, I always had trouble playing other people's solos and so I started inventing bits of my own. They sounded awful but I know now that I did the right thing. It wasn't until 6 years ago with Tony Williams that I realised I was developing my own style, it takes time but it's more rewarding than playing somebody else's note for note.

How much are your solos improvised?

ALAN: All of them are improvised. All players improvise their solos don't they? No? (look of astonishment crosses face) Oh well, all of mine am.

A lot of musicians have said to me that you use some very strange scales.

ALAN: There are thousands of scales that anyone can use, some of the ones that I use sound a little strange because they don't complete in one octave. But that's not the point, a huge knowledge of scales is not enough, the way you use them is.

Are you improving all the time?

ALAN: The last two years have been very productive, I have been playing and I've been practising and I think I can hear a difference. I'm curious to know what the reaction will be to the new album when the time comes.

Can you give me a career résumé so far?

ALAN: 1971 I was still in Bradford; 1972 I had an invite from Ray Warleigh to come to London and a place to stay. Later that year I played with, Jon Hiseman in Tempest but I left in '73. He thought I played too many notes, I don't like being told what to do, I'd rather find out for myself. Anyway I was on the dole for six months and in '74 I made some guest appearances with Soft Machine. In '75 I did two albums with Tony Williams in New York City. I like that place.

Lots of energy going down there for sure

ALAN: Oh yeah I love it. L.A. on the other hand I find a bit too laid back, it's not for me. In fact I was there in Frisco in '76 with Tony or should say without Tony. He was in N.Y.C. trying to sort out the management problems. It was a ridiculous situation, no money, nowhere to stay. Regretfully I sold my beloved 1961 Gibson Les Paul SG Custom to raise the plane fare back to London.

In 1977 I joined Gong which was a potentially interesting writing situation, but they could never stop arguing long enough to orgnaise (sic) anything. We toured a little and then I left. Later that year I played on an album with Jean-Luc Ponty - 'Enigmatic Ocean. In 1978 I played on Bill Bruford's solo albums 'Feels Good To Me' and 'One Of A Kind'. I joined U.K. in '78 which consisted of Bill, John Wetton, Eddie Jobson and myself, one album there. In 1979 I went to Paris with the new trio, and here we are two years later about to make another album. Ultimately I'd like the band to do a couple of albums and establish in the USA: I'm sure we'll have more success over there.

Who is in the band?

ALAN: Gary Husband is the drummer, I found him in Leeds, he plays piano too. The bass player is Paul Carmichael, and vocals for the band are handled by Paul White (sic).

Where do your preferences lie as far as equipment goes?

ALAN: As far as guitars go I prefer the Fender tone and characteristics but I don't like weedy, metallic sounding pickups. I think Leo Fender is a genius but I like PAF pickups. I'm trying one of his new G&L guitars at the moment and they're very hot. The guitar I'm using is a 1970's Fender Stratocaster that's been modified. I enjoy experimenting with modular guitars and I do all of my own electronics. The neck of the Strat I had custom built because I like wide necks, but unfortunately it still wasn't wide enough at the top when I got it back so I had it bound to give it extra width. The neck has an ebony fingerboard.

The pickups are DiMarzio. They've just sent me a pair with black tops because I complained that the cream tops didn't match the whole scratchplate too well. Those people are very good to me. The pickups were especially wound and I'm going to put them in another Stratocaster eventually.

How have you modified your Strat?

ALAN: It only has two pots, one tone and one volume control, as like to keep these things basic. The tone affects the treble pickup only. There's also two switches that I've added. One is a pickup selector, a three way giving either pickup, or out of phase. I only ever use one pickup at a time but the switch was lying around here so I used it. The other switch brings in a capacitor which gives me extra brightness at low volume. The bridge assembly is a standard Fender replacement. I don't like brass fittings.

Do you have any other guitars?

ALAN: I'd really like a good acoustic but I can't afford one. I do borrow guitars from time to time. This Gibson ES175 here belongs to a friend. It seems to be the thing that if you play jazz you have to own a 175. Personally I find the scale a little too short: most jazz players make them sound like rubber bands anyway. I have a Gordon Smith, a lovely guitar, but again I found the scale a little too short, Fender has the extra length that I prefer.

Dick Knight is making me a spurce (sic) solid at the moment, I wonder what the experts make of that. My reason for trying it is because the timber is very light and I tend to get a better sound when I start with a light body. One day I'd like to get a guitar made like a Gibson L7, something that's smaller than a Gibson Super 400, lighter with a larger scale. I like the clearer sound from a cello ('f' hole) guitar - Charlie Christian was my hero. Round hole guitars sound a little on the boomy side to my ears. I've used an Ibanez L5 type cello guitar for recording that wasn't bad.

How about amps and effects?

ALAN: I don't like effects because they can be used creatively but aren't, they soon sound boring.

ALAN: My main amp is a Hartley Thompson used in tandem with a pair of Lab L5 amps with built in limiter, my only concession to effects. The L5's I use on heavy gigs with delay, splendid for fat chords.

I've heard that your fingerspan on the fretboard is quite wide.

ALAN: Well maybe, my middle three fingers are slightly webbed so I suppose it could be even greater.

So much for the small hands theory, and other such excuses.

Do you have any favourite players?

ALAN: There's a guy called Steve Topping I like very much. Mostly it's musicians who play other instruments that move me, horn players for example. I'm more interested in trying to figure out what they're playing than what some other guitarist is playing. Actually Hendrix didn't make any kind of impression on me until after he died.

You amongst most people in the business must have had a worse moment.

ALAN: That's certainly true. I got so depressed at one stage of my career that I got absolutely plastered before a gig. I cancelled out after or it could have been during the first number. Somebody in the audience took over. On the way home that night after the gig, I hit an articulated lorry - it woke me up to life...

-MESSAGE TO THE BUSINESS PUT YOUR MONEY WHERE YOUR MOUTH IS...