The discography has been updated with links to YouTube(++) versions of the albums. See further notes below.

In March 2020, YouTube links were added to the discography. YouTube was chosen as it is presumably the most widely available resource available to audiences all over the world. I have tried to locate officially licensed versions where available. I have tried to link to full album playlists where this seemed most pertinent, and to single tracks where this seemed most pertinent, but you may need to do some extra clicking to get to Allan's tracks. In some single cases, I have made links to other platforms. I hope you enjoy. The official "channel" named as "Allan Holdsworth Topic" is found here: https://www.youtube.com/channel/UCiyDXNsExWcKTDv_EsBJ_Dw

There are many ways of doing a discography. For this version, the following applies:

The listing includes music released officially on vinyl, compact disc and digitally. Though some records were released officially, their legality was contested by Allan, and some were withdrawn from the market, such as reissues of “Velvet Darkness”. More information on this will eventually appear in the articles.

The list is categorized by artist, album name, year of release, Allan’s role, and by the type of performance, as follows:

The list does not contain albums with re-releases and compilations of previously released material, except where the new releases also contain previously unreleased music. That means that the Tempest anthology “Under The Blossom” is listed, for example, as it contains previously unreleased recordings from the BBC. Also, “Wardenclyffe Tower +3” is listed as a separate release. An exception is made for the 2017 box set.

Updates, errors and omissions: A discography will usually be based on some subjective criteria, which may also be revised. Some revisions are in order: Some albums by U.K. released after the band broke up need to be added to the list. There are special editions of some albums featuring previously unreleased material that need to be added for consistency, such as the special edition of “Sixteen Men Of Tain”.

Allan did a number of sessions for the BBC. These have been heavily bootlegged, but never officially released, with some exceptions. Here is a listed of known unreleased sessions: Allan Holdsworth BBC sessions.

Allan made numerous references to albums that he was working on that were not finished. One of these projects was referred to as Snakes And Ladders.

Allan recorded a full album's worth of guitar parts for Soma's second album. At present, this album remains unreleased, but bootleg copies of rough mixes circulate. More information can be found on the Soma page.

Allan is credited on some works where he does in fact not appear:

Speed: Allan is credited as soloist on the soundtrack for the movie "Speed". Apparently, the score composer was a fan, and commissioned some work from Allan. He delivered some SynthAxe material, which was ultimately not used in the final film. It may have had to do with some technical issues. http://www.imdb.com/name/nm0390380/?ref_=nv_sr_2

Steve Morse Band: Stand up. Allan was slated to appear on Steve Morse's album "Stand Up", but for some reason he was not able to deliver his tracks in time. Curiously, the cassette tape cover was already sent to the printer when this happened, and thus the cassette cover lists Allan as appearing on "English Rancher". https://www.discogs.com/Steve-Morse-Band-Stand-Up/release/8933270

Also, there has been a persistent rumour that Allan played on Donovan's "Hurdy Gurdy Man". This rumour has been disproved by Allan himself and his associates. It's probably worth an article of itself, though.

There are a number of sites that present Holdsworth discographies. Below, I have included links to some of these, with a few comments.

Wikipedia Discography: The Wikipedia discography is at the time of writing divided up into "Solo albums", which are subdivided into studio, live and collaborations, and the third main category is "With other artists", with the latter ordered in a format it took me some time to figure out. It starts with the group Igginbottom and lists their 1969 album. Then, it moves chronologically until we come to Soft Machine. All of Allan's albums with the Softs are then listed chronologically, before Allan's albums with Tony Williams are listed chronologically. I find this format confusing. Furthermore, due to its policy on "notability", Wikipedia does not list all albums featuring Allan. Most critically, some albums released posthumously are not listed as a result of this policy.

Discogs Discography: Discogs is a user-submitted site, which means it contains a lot of entries, but which also means that it's prone to errors. That said, Discogs is probably the main source used for the discography on this site. It allows sorting and filtering by many criteria. The link provided lists appearances chronologically, much like the present discography. However, it includes compilations, which makes it somewhat confusing to me. The site lists some outright bootlegs, which I find to be a drawback. You can search for other things than appearances, such as listings for production. With a little clicking around, you can find complete lineups for recordings, composer credits and lots of other stuff. There are some minor errors, but overall, this is my favorite. I haven't checked recently, but I think it contains all of the listings on this site.

AllMusic Discography Allmusic is similar to Discogs in many respects. From what I understand, the listings are editorial, which should ideally mean less errors. However, this is not necessarily the case. For example, AllMusic lists Dononvan's "Hurdy Gurdy Man", although the claim that Allan played on this record has been refuted (which I should probably write about!). It also lists Allan as playing on a Kip Winger album, which I have no other info on. The credits also mix appearances, songwriting, production and everything else into one list. That said, it's a good source, especially for cover versions, although not all the composer listings are correct. 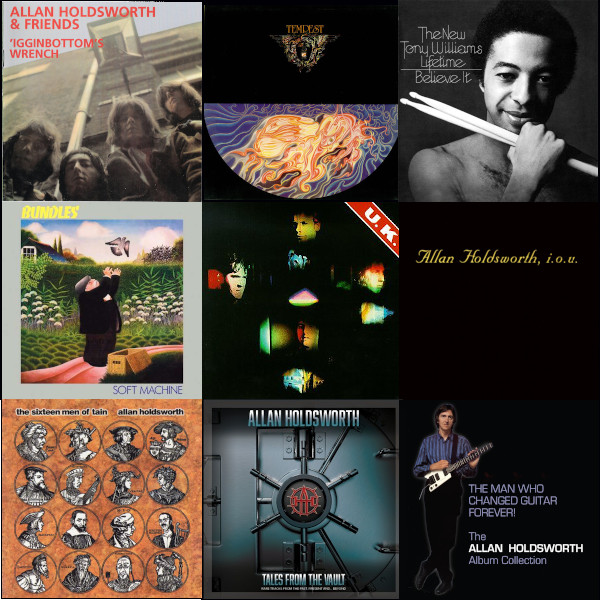