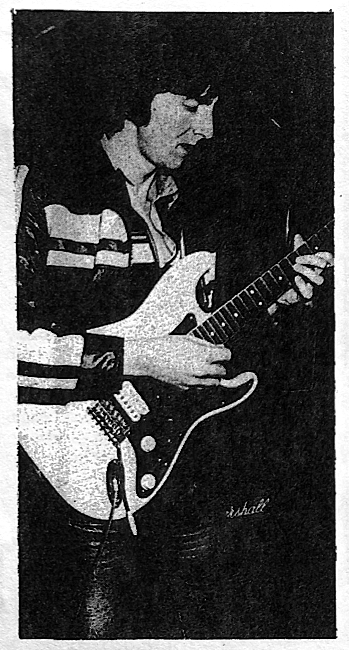 The complete guitarist: Any Key in The U.K.

Allan Holdsworth is often referred, to as a "jazz guitarist" although he hates the tag. Although he is virtually a household name in the business, he only turned fully professional when he joined Jon Hiseman's Tempest in 1970. Since then, he has consolidated his reputation as a fine guitarist with Soft Machine, Gong, Tony Williams' Lifetime and Jean-Luc Ponty. From these bands, it's obvious where the "Jazz" image comes from. He has never, in his professional career, played with a real mainstream rock band and it seems that any band who occasionally veer away from 4/4 time become labelled "jazz" automatically. His latest venture is a unit called U.K. consisting of Bill Bruford, John Wetton, Eddie Jobson and Allan. They have just released their debut album and are currently on tour in England.

When and why did you start to play guitar?

I started when I was about 16 or 17 after I left school because I 'd always been interested in music. My father was a pianist so I was exposed to a lot of music at home. He was like an inspiration to me really in that he often presented me with things I wouldn't normally get to hear. He helped me a lot in that way but I never actually sat and down and learned to read music.

What kind of band did you play in first?

They were a few semi-pro bands from around Bradford, where I was born. It was all workingmen's clubs and that type of thing. After that, I got in one of those Mecca bands in Sunderland and Manchester and played with them for three years. I eventually met Ray Warleigh, the alto player, and he told me that he had a spare room in London because I wanted to move so I stuck it out with the Mecca band for a while and then decided that I couldn't take it any more. I left to go down to London and moved in with Ray. I couldn't have done it without his help, really. It's pretty hard if you don't know anybody.

I was lucky really because I hadn't been down very long and somebody told Jon Hiseman about me and he called and asked me to play and that brought about Tempest. That was my first pro band. I left Tempest in about 1972 and a couple of months later, joined Soft Machine. That was an accident, it was through a Musicians' Union clinic. They wanted Soft Machine to do a clinic but they also wanted a guitarist so they called me separately and told me we could rehearse a few things before the clinic. I just learnt a couple of their simpler numbers and we did them. Afterwards, they asked me to play a few gigs with them, as a guest. That's how that started and I just gradually sort of... stayed.

What kind of music were you listening to when you came down to London?

We'll, all sorts really. From extremes to extremes. I listened to a lot of classical music, not classical guitar music so much, but a lot of violin music. I like jazz as well. I don't like the word 'jazz' but I like anything to do with improvisation. Like, classical music is virtually just one guy's improvisation but it's not spontaneous.

How did U.K. come about?

Well, it had been going for a while before I knew anything about it. John and Bill got together first and then found Eddie and, around that time, I met Bill who asked me to play on his solo album. I was introduced to the other guys and that's how it happened. Nobody actually knew it was going to work or whether we'd get on together 'cos there are a lot of differences. That's probably one of the things that make it good.

What guitar are you using with U.K.?

Basically I'm using a Strat. It's got DiMarzio PAF pickups now. Before that, I had Gibson pickups. It's just got a volume and a tone instead of one volume and two tones. I also did away, with the middle pickup. The toggle switch is just an ordinary three-way. It gives you either pickup or both. I like it because it's really simple. I like to keep the guitar as simple as possible. I chose the DiMarzio PAF's because they're supposed to be an authentic reproduction of the original Gibson pickup. I found with the DiMarzio Super Distortion pickups that, although they're very loud, the sound isn't as good. I don't know why, I'm not really up on what you can do with pickups. I know that if you go over the top with the windings, they become self-inductive or something and I know that if the magnets are too powerful, they'll stop the string vibrating which is your source, really. these pickups are really good. I can't tell the difference between the PAF's and the original Gibson ones, but I can tell the differe nce between the PAF's and the Super Distortion pickups - they're very different.

Are you after a Gibson sound with a Strat "feel"?

No, I'm not particularly after a Gibson sound. I feel the Strat is potentially a really great guitar but what lets them down is the pickups. The reason I like Gibson pickups or pickups like Gibsons is because' they're humbucking. I always use high amplifier setting. If I use a nonhumbucking pickup I get lots of problems with buzzing and things. Obviously a double-bobbin pickup is better in that respect and I think they' have a bigger output too and obviously, if you're going to get it from anywhere, you've got to get it from the source.

What amplification do you prefer to use?

Well, I've used lots of different amps. The one I use now is a Marshall 50 amp with two 4x12 cabinets. I like to have a lot of speakers and not much amp. I don't like the speakers to distort.

Have you any other guitars?

Well, I'm having another one made by Dick Knight. He did a lot of work on my Strat. It has a very wide fingerboard. It's 1¾ inches which isn't ridiculously wide but certainly wider than most guitars these days. The fingerboard is very flat because I like the flatter feel. The original Fender fingerboards were cambered. In fact, Dick virtually made the guitar. He's making another that's almost ready which is really nice. I'm still going to have two pickups on it instead of three but I'm gonna use the DiMarzio Strat pickups with the adjustable polepieces. I really like Strats though, the design is amazing. I also use the tremelo [sic] arm a lot and the Strat tremelo has got to be the best one ever. The whole thing moves so you don't get that "sawing" effect which pulls them out of tune. I have an old Gibson Firebird with their vibrola on and, when the strings move back and forth over the bridge, even though the tension's pulled up to where it should be. If a winding gets caught up on the bridge saddle, t hat string will be flat or sharp according to which way it gets caught. That doesn't happen on a Strat. I've heard people say that they can't keep Strats in tune with the tremelo arm but mine never goes out of tune.

Have you taken any springs off?

Oh yeah, I've only got three on there. It just matches the weight of the strings on there. If you put heavier strings on, then you'd possibly need more springs. I don't think anyone needs five though.

I've got a Gibson 12-string. It's like the 335 but it's really narrow at the nut so I don't like it much. Unfortunately, there isn't much choice with 12-strings because I've looked around and I couldn't find one electric 12-String. Nobody seems to stock them. It's OK apart from the narrow neck. It's narrower than my Strat and it's got twice the number of strings! I don't suppose I'll be playing it that much. I have an Ovation acoustic guitar. The only reason I bought that was because it's amplified with that bridge thing. It's much better than the Barcus Berry. You can get more volume without feedback. I've also got an Ibanez L5 copy and that's beautiful. It's the best acoustic I've ever heard. I used it on the album. I've finally found a guitar that I can play my own way. It's not very loud but it's really nice for recording.

You don't use any effects do you?

No, I don't really like them. I've probably said this thousands of times but you can practically tell when a record was made by what's on it. 'Oh, that was made in 1973 or 1974 when they invented phase shifters' and that sort of thing. I tend to avoid that and try and get the best sound from the guitar itself.

At Trident. The only time I've used Trident before was when we mixed a Gong album there but it's great, a fantastic place, the engineers are great. We produced the album ourselves. I think it needed to be done like that really this time. Because the music wasn't written by one guy, it changes from player to player as it goes through each piece. It might be better to get an outside producer for the next album because he'll have a chance to listen to the material first but it was better this time if we produced it ourselves. And besides, we had Steve Taylor as an engineer and he's fantastic!

Were there many overdubs?

Well, there were some, not an awful lot. We started with bass and drums mainly. That's a thing I'd never done. I don't like that way of working at all. We're going to do it different next time.

Can you pinpoint any one particular influence that helped you evolve your style?

Well,' I think I was influenced in that I think I wanted to play a different instrument to the guitar! It started very early when I was listening to jazz records. The guitarist would be playing well but I was often more impressed musically with the sax solo. That's what inspired me really. I wanted to get a more horn-like thing out of the guitar. It's very natural. I didn't consciously go out to do that. I knew I loved that but I didn't know that I was approaching it differently until a few years later. I just like that sort of liquid thing as opposed to guitars with a machine-gun feel. I really like it to be like . . . water. It's more like patterns as well. I know people mock guitarists who play fast things but I don't think of it in terms of a stream of notes. It's like a pattern, you create a pattern or a colour that you see as one. It's like a colour that appears before your face.