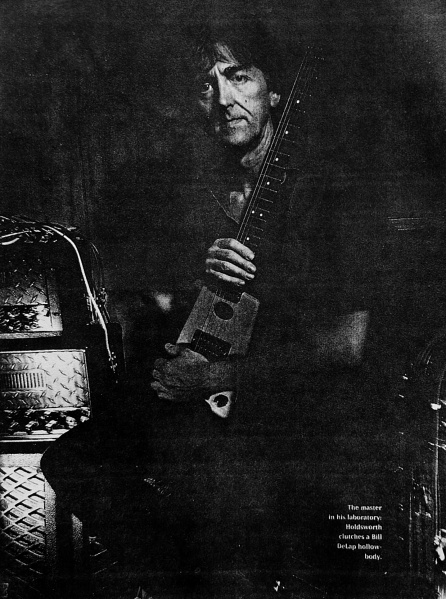 Society rarely recognizes genius. Perhaps that's why Allan Holdsworth sympathizes with Nikola Tesla. Holdsworth named his latest Restless album The Wardenclyffe Tower in tribute to the man who developed alternating current, fluorescent lighting, and the radio without attaining the fame of an Edison or Bell. The Wardenclyffe Tower was Tesla's most ambitious, and perhaps most controversial idea: a tower that broadcasts radiowaves worldwide and transmits power through the earth's surface, without transmission wires, providing free electricity to the masses. Of course, Tesla never saw his dream come true - he couldn't raise the funds.

In many ways, Holdsworth shares Tesla's ambitious, idealistic, and inventive spirit. Holdsworth constantly pushes the guitar beyond the boundaries that confine so many players. He has developed his own voice on the instrument, explored guitar synthesis, and experimented with special baritone guitars to expand the instrument's range and custom electronics to improve its sound. Most important, he pursues and maintains musical integrity without compromising his vision, conceding to his record label's whims, or blindly pursuing the almighty dollar.

"If it doesn't mean money for anybody, then people don't want to do it," Holdsworth laments. "It seems like that's the way the world's going at the moment. Everything revolves around money. It's important to a certain extent, but not at the cost of everything else. It was the humanitarian aspect of Tesla that impressed me the most."

Oddly enough, Holdsworth became a musician almost by accident. "I had no desire to become a musician," he explains. "I was only interested in listening. When I started listening to saxophone players, I became interested in playing sax. My parents couldn't afford to buy me one, so my father bought an acoustic guitar from my uncle. He left it lying around to see if I had any interest. Through time, I picked the thing up and tried to play it, and slowly I started to pick a few things up."

Holdsworth's love of the saxophone never waned, so he attempted to emulate that sound with his guitar. "I tried to make electric guitar a non-percussive instrument, more like a horn. There's something about the sound I wanted to hear that doesn't happen naturally on the instrument. I'm constantly trying to refine my tone and make it better. Since recording The Wardenclyffe Tower I've made a lot of progress. I'm really happy with the way my guitar sounds right now."

Although Holdsworth uses a pick, he manages to produce smooth tones with a transparent attack. "I practice with a clean sound and try to play phrases and notes, placing the accents in different places. I hammer or tap the first note instead of picking it. And I tap notes with my left hand on the way down the neck instead of using pull-offs. It's pretty much left-hand technique. I can't tap with two hands at all, though every now and again I may tap in an extra note up the neck."

Allan's practice routine reveals much about how he develops musical ideas: "There are things I work out away from the guitar, like various scales. I'm not concerned with modes, rather the permutation of intervals that differentiate one scale from another. I never think of a scale as having a set bottom or top. To me, it goes from the lowest available note to the highest on the instrument itself. I get this total vision of the whole neck instead of viewing a scale in a certain position. I like to see all of the notes at once. I think of the scale as a whole family of notes, with chords being parts of that family. If somebody writes a Cmaj7b5 chord, I won't necessarily play an inversion of that. I play groups of notes that are part of that scale."

Holdsworth experiments tirelessly with equipment. His studio is littered with the latest amps and gadgets from several manufacturers, all awaiting Allan's approval. He's most satisfied with Mesa Boogie gear: "For a long time now I've mainly been using Boogie stuff. I just discovered the Dual Rectifier. It's a cross between some of the things I liked about their old amplifiers, and it has a lot of what's happened afterwards. It has a vocal quality that I really like. I also have a .50 Caliber which I've used for a long time. It's slightly modified so it doesn't have as much gain."

Holdsworth plans to record an album of multi-tracked, orchestrated guitars using several custom 6-string baritone and tenor guitars he developed with luthier Bill DeLap. Unlike most baritone guitars, which utilize heavier-than-normal strings, Holdsworth's instruments have regular-gauge strings but extended scale lengths. The baritone guitars come in three sizes - the largest has a 38" scale.

The Wardenclyffe Tower features several cuts with Synthaxxe (sic) guitar synthesizer, but Allan says he's retired that instrument from live performance, possibly even from recording. In its place, he's dabbling with a new controller developed by Starr Switch. "The instrument has unbelievable potential," he beams. "It's different than a guitar. It looks like a small keyboard. It's laid out with 24 'strings,' which are actually keys, and 23 frets or keys. It's like a two-dimensional keyboard. You can play it vertically as well as horizontally, and play chords on a single 'string,' I had him design me one that's like a guitar neck, where the different-colored keys are like the dot markers on a guitar."

Be it gear or music, Holdsworth constantly looks forward. "I really hate listening to my old stuff," he complains. "It sounds archaic. I feel like I've grown more in the last four or five years than I did in the previous 10 or 15. As soon as you learn something, it opens up another closet of stuff that you don't know. As long as I feel I'm making some kind of progress, however slow, I'm happy with it."

But with diminishing label support, limited recording budgets, and the need to support his family, Holdsworth says his future as a musician remains in question: "I can't make a decent record for the kind of money the label wants to pay. Trying to get cheap studio time and working at ridiculous hours, expecting all the other musicians to do that and not get paid, is not something I want to do anymore. I've thought about what else I could do to make money to survive. The older I get, the worse it gets, because I always used to think there was something around the corner.

"I see why people get accused of selling out. I read an article with George Benson and some guy was giving him a hard time, assuming that he had sold out. He said to the guy, 'What makes you think what I do is so important that I have to sacrifice my family for it?' I can see the argument from both sides. But I've never been a showman - I even have a hard time talking to the audience. I would rather get a job doing something else than try to make money playing another form of music."