This album features Allan, Chad and Jimmy, as well as keyboardist Jim Cox. Around half the tunes are Chad compositions, and they are for the most part energetic fusion, as exemplified by the groovy opener “Holiday Insane” and “Tell Me”, which Allan would perform with his own band. The other half are studio group improvisations, with a freer dreamlike quality. Allan sounds great, but was apparently not pleased with the signal processing added to his tone in the mix. 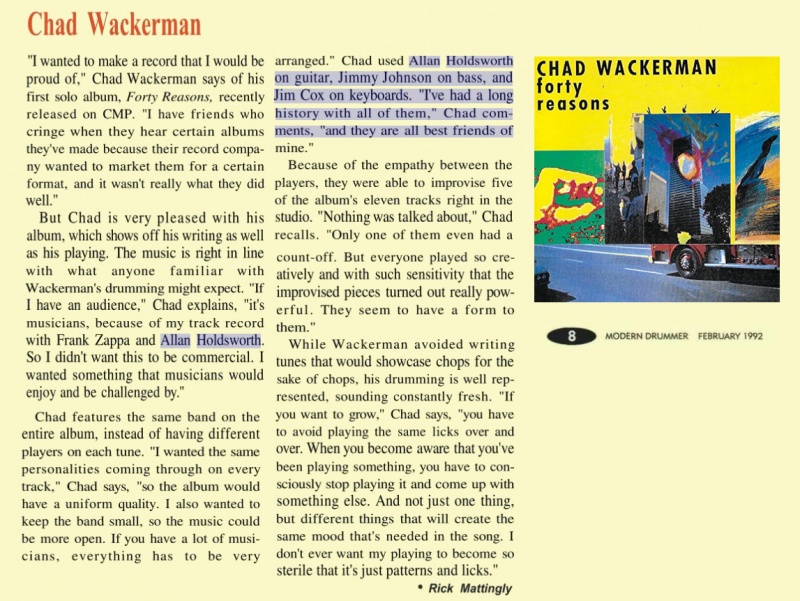 caravan with a drum solo: the chad wackerman interview

Q: What did the musicians think of doing free improvisations?

CW: They were into it - it was nice. I know I hadn't done it or tried it in years. It was just roll tape; with the exception of one, there were no count-offs, no-one talked about what key we were going to play in, who was going to start... It was truly improvised. The engineer said 'We're rolling'. One piece called 'Go', we thought it would be nice to have a duo. So it was one take and that was the duo. Then it was 'Let's try a trio', keyboards, bass and drums -go' That turned out to be 'Waltzing on Jupiter'. We just picked the ones we thought were the strongest, that would make a nice trade off with the composed things we had.

Q: How did you find the musicians? I've heard of Jimmy Johnson.

CW: He's on most of Allan's records. We had a trio for a long time. That was a band I was obviously very comfortable with, that I always felt was very adventurous. Jimmy was the bass-player for all of his records, starting with 'Metal Fatigue'. I met Allan through John Ferraro, again (laughs). It's always based on clicker friends. Allan had moved to California - they'd done I think one tour in the States. Gary had to go back to London and Allan needed a drummer. He'd been auditioning for a couple of weeks. John Ferraro knew Dave Ball who used to bicycle with Allan and found out that Allan needed a drummer. So Dave called John and said to give Allan a call, and he did. But at the last moment he got another tour, so John called me and said 'Holdsworth needs a drummer'. It usually works like that.

Q: That's probably enough of putting you on the torture wrack.

CW: I don't mind. It was interesting. I always wanted to make a solo album and I always had these guys in mind. I'd love to be a leader, it's tricky to do that and make a living at it, so I don't know if that will ever happen. We'll see what happens with this.

Q: The review in the Wire said that Allan dominated your album.

CW: The music is completely different from Allan's music. I think Allan has as strong a personality as Michael Brecker and you hear Michael on a lot of records. For me, I want the best people I can get and these are my favourites right there.

Some have suggested that some of your finest playing appears on it.

Really? I don’t know about that! [laughs] You know, that whole album is live. I’m never happy with anything I do like that. It’s a good album. I enjoy Chad a lot, and I think he did a great job and the ideas he had. But we didn’t rehearse enough though. We got into the studio and recorded it live. I think it’s a good album from Chad’s point of view, but I’m not happy with what I did on it, no.

You know, it’s sort of like somebody comes up to me and says, "Oh yeah, I really like what you did on Chad’s new album," but I’d have to say they’d be really completely crazy. ‘Cause for example, that last album that we did with Chad, has prompted me to decide permanently and completely locked within my mind that unless I know the engineer, or what he’s gonna do, I’m never going to play on anybody else’s album again.

MP: What about it? What made you say that?

AH: Well because he took what I did and completely changed it, and destroyed it, in my opinion.

KK: And it’s Chad’s name on the record, so ultimately Chad has to be satisfied...

AH: Chad has a certain responsibility to it...

MP: Destroyed it? How?

AH: Well, he did all kinds of stuff to the guitar-he put all kinds of effects on it, and processed it and harmonized it, and did shit to it that would have driven me completely up the wall-and does! I can’t even listen to that record!

CH: In other words, the engineer took the track that Allan had laid, and had his own ideas about the effects and, you know, basically botched it up.

AH: You know, I told Chad, with all due respect, to be loose on it... like in terms of processing. And if the guy wanted to do anything [try it,] but what I was meant was more like... I was thinking of it in a more subtle way; I wasn’t thinking of any blatant, complete, tortured sounding shit, you know, which is what happened. And... I can’t listen to it-it’s painful. I can’t believe that someone can do that. That just shows you-that’s another reason getting back to your question about the producing-is why I can’t give that stuff up to people. ‘Cause it’s like taking a solo that someone did on the saxophone, throwing it through a ring modulator... harmonizing it... you know, putting twenty tons of reverb on it, and then saying, "Thanks for that solo."

AH: Not just... Chad’s album just confirmed that. That it was a complete sidetrack, and in a way, I let my friendship with him because I think he’s great, you know, he’s a wonderful musician and a really good friend. But the friendship overrode my gut feeling.

KK: Did you have reservations even just prior to the gig?

AH: Ah, I really did not want to do it. I tried to kind of escape.

MP: When this whole thing happened with the Chad album, I remember you also having a problem with the fact that whoever was marketing it wanted to feature your name pretty prominently, whereas you saw yourself as a contributing member and didn’t want to be, you know...

AH: Well I just saw myself like all of the other guys, and not bigger. Just the same as all the other sidemen.

MP: But yet they were displaying your name a little bit more prominently-or they were trying to.

AH: Yeah, I think so, but that was a record company thing. I don’t think we should get into that... well, I know what you mean. That’s how I felt, yeah.