Allan Holdsworth: From his yodeling uncle to an I.O.U., an axeman cometh 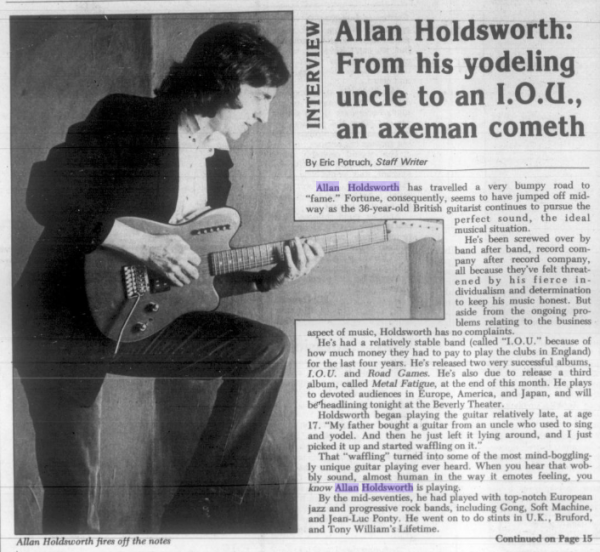 Allan Holdsworth has travelled a very bumpy road to "fame." Fortune, consequently, seems to have jumped off midway as the 36-year-old British guitarist continues to pursue the perfect sound, the ideal musical situation.

He's been screwed over by band after band, record company after record company, all because they've felt threatened by his fierce individualism and determination to keep his music honest. But aside from the ongoing problems relating to the business aspect of music, Holdsworth has no complaints.

He's had a relatively stable band (called "I.O.U." because of how much money they had to pay to play the clubs in England) for the last four years. He's released two very successful albums, I.O.U. and Road Games. He's also due to release a third album, called Metal Fatigue, at the end of this month. He plays to devoted audiences in Europe, America, and Japan, and will be headlining tonight at the Beverly Theater.

Holdsworth began playing the guitar relatively late, at age 17. "My father bought a guitar from an uncle who used to sing and yodel. And then he just left it lying around, and I just picked it up and started waffling on it. That "waffling" turned into some of the most mind-bogglingly unique guitar playing ever heard. When you hear that wobbly sound, almost human in the way it emotes feeling, you know Allan Holdsworth is playing,

By the mid-seventies, he had played with top-notch European jazz and progressive rock bands, including Gong, Soft Machine, and Jean-Luc Ponty. He went on to do stints in U.K., Bruford, and Tony William's Lifetime.

But the bands weren't concerned with Allan the person. He was victimized by his own overwhelming talent. His tremendous ability was all the bands cared about, and he was left depressed and unfulfilled.

So, it was off to America and greener pastures. “The only reason we came to America was by accident, really," Holdsworth says over a tall frosty beer. “I tried to get a band together called I.O.U. in the beginning, which was Gary Husband on drums, Paul Carmichael on bass, and Paul Williams (not the diminutive pixie of “Evergreen” fame) singing. “We didn't do too well,” he continues. “We couldn't get anybody interested in the music. Then we made an album which was kind of self-financed, but we couldn't get any interest in that either."

Bassist Carmichael came to Los Angeles on vacation and met someone who said she could book the band into some of the city's major clubs. “So I said 'Okay, we'll have a go,' because I was close to giving up and I was going to get a regular job.

I.O.U.'s first gig in America was at the Roxy in Hollywood. Both nights of the engagement were sold out and full of excited devotees who had never seen Holdsworth before. Yet, he remains humble and even surprised at the degree of his initial success. “We were amazed that people knew who we were. It was great for us to have an audience instead of an 'audient.'

Holdsworth looks back on his days in U.K., which included keyboardist Eddie Jobson, bassist John Wetton, and drummer Bill Bruford, with disgust. “Both Bill and I were fired from that band anyway. It was a bad choice on their part to put the band together because it never worked.

"I used to hide at gigs because I was embarrassed. I didn't have anything to do. There were a few solos but they'd always be the same, and it was like playing with a machine." Internal problems with I.O.U. left Holdsworth without a rhythm section, so he recruited bassist Jeff Berlin and ex-Frank Zappa drummer Chad Wackerman. About this time Edward Van Halen approached Holdsworth about signing with Warner Brothers Records.

Van Halen got superproducer Ted Templeman to sign the band to a two-record deal. “I didn't realize it at the time, but Van Halen (the band) was so big that Templeman probably just signed us to keep Eddie happy. I don't think they were ever interested in what we did."

I.O.U. released Road Games, a six-song EP, in 1983, and without any publicity from Warner Bros. whatsoever, sold about 75,000 copies. Holdsworth sold an astounding 35,000 copies of the first album, just through mail order and at concerts. The audience was obviously there, but because the albums contained equal smatterings of jazz and rock, no radio station would play them.

The audiences are changing, too. “The only reason I can say it's changing is because we get more girls at the gigs. Before it was all guys, or all guitar players. That's why it would be nice to get something on the radio so people could actually hear it.

"You know, some poeple [sic] are going to hear the music and they're going to say, "Yuck!” But there are other people who are going to like it. It's just the fact that if poeple [sic] got the chance to hear different types of music, they would start listening to it. It's just the radio people saying, 'Well, nobody will like it so we won't play it.' Who are they to say that?" For now, Holdsworth will stick to what he's doing. He can't see himself going off and doing something commercial, "something silly. Money's not a motivation for me at all. It doesn't matter. I just want to progress. All I want to do is learn how to play the guitar - as much as I can get down in one lifetime.”

Allan Holdsworth and I.O.U. headline tonight at the Beverly Theater with Jimmy Johnson on bass and special guest Gordon Beck on keyboards.

Allan Holdsworth's guitar is too hot at the Beverly 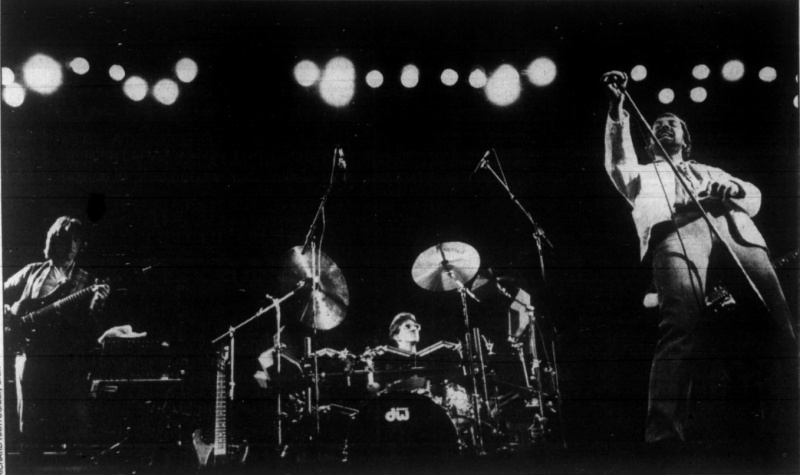 For guitarists, Allan Holdsworth is a bonafide hero. Most of the packed crowd at the Beverly Theater Friday night worshipped every note generated by his acrobatic fingers. It was all well deserved, too. There isn't a guitarist alive who can pull off the kind of pyrotechnics he can. Even Eddie Van Halen says that it takes him two hands to do what Holdsworth can do with just one.

Holdsworth played both old and new material from his three albums with I.O.U. - I.O.U., Road Games, and the soon-to-be-released Metal Fatigue. His blazing jazz-rock sang, smoked, and soared, all at the same time. Everyone in the band - Holdsworth, bassist Jimmy Johnson, drummer Chad Wackerman and pianist Gordon Beck - played inspiringly, adding fresh doses of color and fire to tunes that needed a little push. Even Holdsworth admitted that all the songs are old, and after returning from a tour in Japan, he said he will start over again with new music and a more focused direction.

Friday's concert, then, seemed like an homage to this kind of technical brilliance music that he's been composing and performing for the last five years. There were even some surprises, including a very clean and strong performance by vocalist Paul Williams (not the little guy from Phantom of the Paradise).

The most notable surprise, however, was a guest appearance by pianist and past Holdsworth collaborator Gordon Beck. Beck's addition to the band was a musical Midas touch. Songs like "White Line" and "Tokyo Dream" glistened with new-found energy as Beck embarked on long, but thoroughly engrossing solos.

Beck, a jazz pianist who said he never plays rock-based music, created with his presence more jazz feel than has ever been present at an I.O.U. concert. Drummer Chad Wackerman and bassist Jimmy Johnson fed off of Beck's playing with the enthusiasm of musicians first getting to know one another. And well they should. Beck had just flown in from England a few nights before and was feverishly busy all week learning the songs.

It used to be that a nonmusician “just couldn't” go to and enjoy an Allan Holdsworth concert. Either the music was too complex or there wasn't enough singing, or there was some other inane reason for people to fear something challenging and new. There were some nonmusicians at this concert, and they were cheering just as loudly and just as sincerely as the rest.