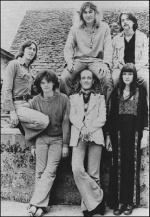 Allan would perform on three albums by Pierre Moerlen's Gong, as the band was sometimes credited: "Gazeuse" (also known as "Expresso"), "Expresso II" and "Time Is The Key". Allan also contributed as a composer on "Gazeuse!". Allan would later record with the spin-off project Gongzilla, led by Hansford Rowe and Bon Lozaga.

At Trident. The only time I’ve used Trident before was when we mixed a Gong album there but it’s great, a fantastic place, the engineers are great. We produced the album ourselves. I think it needed to be done like that really this time. Because the music wasn’t written by one guy, it changes from player to player as it goes through each piece. It might be better to get an outside producer for the next album because he’ll have a chance to listen to the material first but it was better this time if we produced it ourselves. And besides, we had Steve Taylor as an engineer and he’s fantastic!

The emergence of Allan Holdsworth as a force to be reckoned with in ‘best guitar player’ stakes has taken a lot of people (myself included) by surprise. Despite having been around the Jazz/Rock fringes of the business for several years this soft-spoken Yorkshireman first came to my attention relatively recently, on the release of Gong’s Gazeuse album.

How did you happen to join Gong?

I had been back in England for a while and got a call from a guy at Virgin Records saying that this band, Gong, was looking for a guitarist. I didn't know anything about them, but I decided to give it a thrash. I really enjoyed doing the album with them [Expresso].

Were you afforded much musical freedom with them?

Oh, yeah. But it was mainly a matter of playing solos. Very little else was asked of me. I tended to lay out when I didn't have specific parts to play.

In 1977 I joined Gong which was a potentially interesting writing situation, but they could never stop arguing long enough to orgnaise (sic) anything. We toured a little and then I left. Later that year I played on an album with Jean-Luc Ponty - ‘Enigmatic Ocean. In 1978 I played on Bill Bruford’s solo albums ‘Feels Good To Me’ and ‘One Of A Kind’. I joined U.K. in ‘78 which consisted of Bill, John Wetton, Eddie Jobson and myself, one album there. In 1979 I went to Paris with the new trio, and here we are two years later about to make another album. Ultimately I’d like the band to do a couple of albums and establish in the USA: I’m sure we’ll have more success over there.

So that was an accident, and after that Gong; that stopped existing as the band fell apart, so that wasn’t my fault. And than Jean-Luc Ponty; even before I started playing with him I had agreed with Bill (Bruford) that I would co-operate on his solo-project, so after I had finished with Jean-Luc I had to go again to work with Bill.

Gong had a whole lot of potential, especially the two vibes-players, Benoit and Pierre (Moerlen). A very interesting group, and it was sad that they didn’t stay with each other. It was politics, and also the fact that they came from different countries (England and France).”

Still there were people like Mike Oldfield and Nick Mason involved with the band.

“Yes, but I had never heard of them before I started playing with them. There was someone from Virgin, their manager at that moment, who put me into contact with them because they were looking for a guitarist. And that was all, at that moment I didn’t know anything about those flying teapots (laughs sour).”

Gong was good too. It was good fun. I didn’t speak French and they were always arguing in French, so I never knew what the hell they were arguing about! But, I think the band had a lot of potential, it was just never reached. I recently listened to Gazeuse! recently, because it was re-released on CD. I thought I was terrible on it, but the band sounded good. It still sounded pretty fresh—especially the drums. Pierre [Moerlen] sounded great—it sounded like it could have been done yesterday. That says a lot about his drumming.

So to Soft Machine and Gong. Given Allan Holdsworth’s links with Nucleus, with the musicians in Sunship, and later with Bruford, I long ago came to the conclusion that here was a musician very much aware of the dynasty of bands and musicians which can be traced right back to the mid-Sixties with the Wilde Flowers. Surely it wasn’t a coincidence that Allan Holdsworth first played in the Soft Machine and then Gong. And yet: "In both cases I had no prior knowledge of the bands. In Gong I knew nothing about Daevid Allen or anything else that had gone before. I don’t mean that in a bad way - I’d never heard it. Same with Soft Machine - I hadn’t heard what had happened before, which may be a good thing, because then you’re not trying to keep something alive. But there was a guy who was also a huge help to me starting out called Brian Blain, who works for the Musicians Union. He was absolutely wonderful - he helped me a lot. I think he really liked me and tried to put me in different situations. I remember we did some clinics - that’s how I met John Marshall. I guess John told the rest of the band about me, and then Brian Blain hooked up a couple of clinics with the Soft Machine, but they added a guitar player because at that time they didn’t have a guitar player.

So, how did the Gong projects come about?

Well, it’s funny because it kind of intertwined. I then went to do the thing with Tony Williams and stayed there in New York and then we had some real problems. Not with Tony or the band, because that was the other thing - I loved that band - enjoyed every minute of it - but it was really rough financially. I stayed at Tony’s house which was fine. I didn’t need any money and he took really good care of me. But when we were on tour, we had got back to New York and I’d scraped together enough money to get a plane ticket back to see my girlfriend. So I was there, hanging out, and then I phoned back to see what was happening, and then I found out that the tour manager didn’t get paid and he was in charge of my guitar and he sold it!

"That was the first and only time that I ever got that attached to an instrument. I was mortified! I only had one - I carried it everywhere - I used to buy a ticket for it on the plane... I’d had a lot of SG’s - but instruments are like that - you can make 50 of them but there’ll only be one of them that’s any good - some of them might be OK, but only one of them will be magic and so it was sold and I was completely bombed out. So then I went back to New York and had to buy a new guitar and there in the window was hanging my guitar! But I couldn’t prove it was my guitar and it was more money than I could afford, so I had to buy something else! So I bought another one and then we did another tour and ended up on the West Coast, ended up in San Francisco. And then the band ran out of money. Tony went back to New York to find out why there was no more money and both me and Alan Pasqua had no hotel - we were absolutely out on the street with a suitcase and a guitar. So we went down to the club where we’d been playing and the waitresses there gave us free drinks. We found the guy who had put us up for the night and we get back to this guy’s house in the evening and he said, ‘yeah, you can stay in this bed and you stay in that bed’. And we get back after the club had closed and there were two other guys in those beds! So this went on for three nights, and after the third night I said, ‘Man, I can’t hack this anymore’, so I took my guitar to the pawn shop and sold it. Alan Pasqua lent me the money (he lived in New Jersey at the time) to get from San Francisco to New Jersey and bought the ticket with my guitar from New York to London. I didn’t have anything! Just a suitcase.

"Tony Newton was OK, because he lived in Los Angeles, so a ticket from San Francisco to Los Angeles wasn’t really expensive. So that’s when this thing came about with Gong. I got this call from Nicholas Powell, who actually managed me for a while. He split from Virgin Records and wanted to get involved in the video stuff. He really helped me out. In fact, it was Nicholas Powell who gave me the free studio time on the barge to record the IOU album.

"Anyway, Nicholas Powell said that he had this band, Gong, on their label who were looking for a guitar player, so I said, sure. Because at that time it didn’t look promising going back to the land of pawning guitars!

"So I did. I played with them and was intrigued with the line-up... I thought it was a fascinating group. So we did that first album. And then I got another call from Tony to go back again, and it was a really tough one, and this time I decided not to go. And then I guess I went from Gong to UK, because I met Bill during that period."

Expresso II (on which Allan adds finely crafted solos to three of the six tracks) and his brief appearance on ‘Time is The Key’ came later, but this version of Gong was, of course, the Pierre Moerlen brand: a fascinating excursion into the world of marimbas, glockenspiels and vibraphones. Gong had long since left Daevid Allen territory. Plus the switch in culture: "They were all French. It was great – they would have these terrible arguments and I would have no idea what they were going on about! In fact it was a good thing I couldn’t get involved... in fact they were all probably talking about me..!"

Are there any things from that early period before you really got into your full-blown solo career—when you were kind of a hired gun—anything you look back on fondly and think, “Damn, that was pretty good”?

Not usually [laughs]. Sometimes, if I ever have the courage to listen to anything, which I don’t usually have, there are some times … a friend of mine actually played me some of that first Gong record, and some of the stuff on that I actually liked. I can’t think of exactly what it was, but there were moments that went by and I went, “Oh, I wonder what happened to that?” You could hear something that I was thinking about, but then somehow, some way, I must have deviated and went slightly left or right of whatever that was. And I kind of liked some of the sounds on that record. And, of course, with Tony Williams, that was mostly because of Tony and Allen, and just recently I’ve had the opportunity to play with Allen Pasqua again, which has been a really, really wonderful thing for me, because he’s such an amazing musician.