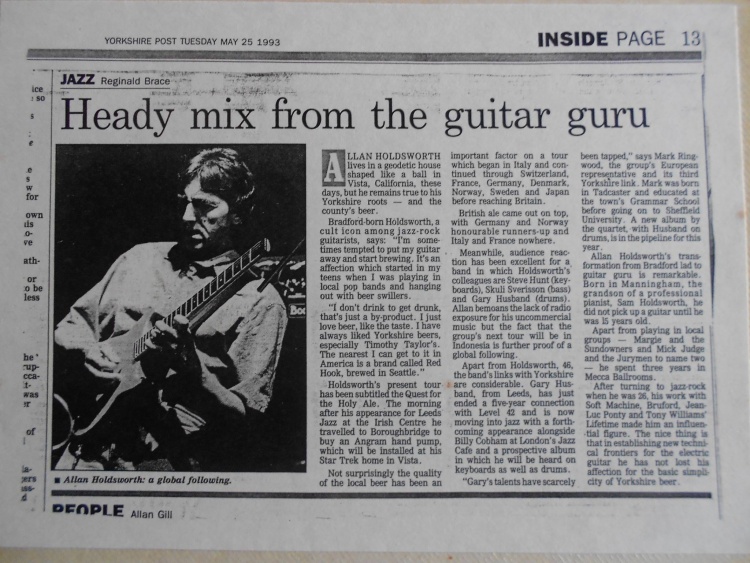 Heady mix from the guitar guru

ALLAN HOLDSWORTH lives in a geodetic house shaped like a ball in Vista, California, these days, but he remains true to his Yorkshire roots -- and the county's beer.

Bradford-born Holdsworth, a cult icon among jazz-rock guitarists, says: "I'm sometimes tempted to put my guitar away and start brewing. It's an affection which started in my teens when I was playing in local pop bands and hanging out with beer swillers."

"I don't drink to get drunk, that's just a by-product. I just love beer, like the taste. I have always liked Yorkshire beers, especially Timothy Taylor's. The nearest I can get to it in America is a brand called Red Hook, brewed in Seattle."

Holdsworth's present tour has been subtitled the Quest for the Holy Ale. The morning after his appearance for Leeds Jazz at the Irish Centre he travelled to Boroughbridge to buy an Angram hand pump, which will be installed at his Star Trek home in Vista.

Not surprisingly the quality of the local beer has been an important factor on a tour which began in Italy and continued through Switzerland, France, Germany, Denmark, Norway, Sweden and Japan before reaching Britain.

British ale came out on top, with Germany and Norway honourable runners-up and Italy and France nowhere. .Meanwhile, audience reaction has been excellent for a band in which Holdsworth's colleagues are Steve Hunt (keyboards), Skuli Sverisson (bass) and Gary Husband (drums). Allan bemoans the lack of radio exposure for his uncommercial music but the fact that the group's next tour will be in Indonesia is further proof of a global following.

Apart from Holdsworth, 46, the band's links with Yorkshire are considerable. Gary Husband, from Leeds, has just ended a five-year connection with Level 42 and is now moving into jazz with a forthcoming appearance alongside Billy Cobham at London's Jazz Cafe and a prospective album in which he will be heard on keyboards as well as drums.

"Gary's talents have scarcely been tapped," says Mark Ringwood, the group's European representative and its third Yorkshire link. Mark was born in Tadcaster and educated at the town's Grammar School before going on to Sheffield University. A new album by the quartet, with Husband on drums, is in the pipeline for this year.

Allan Holdsworth's transformation from Bradford lad to guitar guru is remarkable. Born in Manningham, the grandson of a professional pianist, Sam Holdsworth, he did not pick up a guitar until he was 15 years old.

Apart from playing in local groups - Margie and the Sundowners and Mick Judge and the Jurymen to name two - he spent three years in Mecca Ballrooms.

After turning to jazz-rock when he was 26, his work with Soft Machine, Bruford, Jean-Luc Ponty and Tony Williams Lifetime made him an influential figure. The nice thing is that in establishing new technical frontiers for the electric guitar he has not lost his affection for the basic simplicity of Yorkshire beer.