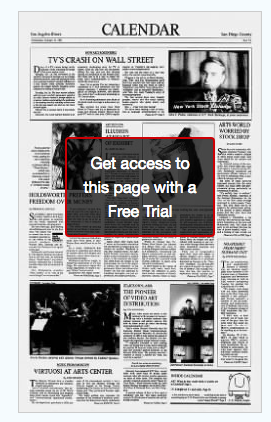 SAN DIEGO — Eddie Van Halen is widely hailed as the king of the rock guitar, so naturally he's not easily impressed with many of his guitar-slinging peers.

But four years ago, upon hearing Allan Holdsworth play for the first time, Van Halen was so wowed that he immediately marched into the offices of his record producer, Warner Bros. Records, and demanded that Holdsworth be signed on the spot.

Holdsworth said he was honored by Van Halen's belief in his talents and by the fact that the resulting album, "Road Games," was subsequently nominated for a Grammy Award as best rock instrumental of the year.

Still, Holdsworth considers "Road Games" to be "one of the worst things I've ever recorded."

"It was a disaster," he said. "You wait all your life to be signed by a major label, and then when they sign you, they don't want you to do what you want to do. So as far as I'm concerned, it was a complete waste of time.

"The album ended up pleasing neither me nor them; it was somewhere in between what they wanted and what I wanted.

"A lot of the pieces on that album could have been great, if only Warner Bros. would have let me be me."

As a result, Holdsworth has returned to recording solo albums for smaller labels like Enigma and Relativity, where there's less money but more freedom.

Holdsworth first began recording solo albums in 1982, after spending most of the 1970s honing his instrumental skills with such progressive art-rock bands as Soft Machine, Tony Williams' Lifetime, and Gong. He also cut an album with jazz violinist Jean-Luc Ponty and another with former Yes and King Crimson drummer Bill Bruford.

In 1978, Holdsworth and Bruford joined two other veteran British art-rockers, Eddie Jobson of Roxy Music and John Wetton (Roxy Music and King Crimson), to form the critically acclaimed group U.K. That lasted less than a year.

"It was a total mismatch of people; our musical ideas were totally different," Holdsworth said. "They wanted me to play the same solos every night; the music was much too organized for me.

"There was no room for any creativity, and I felt stifled."

After recording a second album with Bruford in 1979, Holdsworth briefly joined a trio fronted by ex-Cream bassist Jack Bruce before striking out on his own in 1980.

Two years later, he landed his first solo deal, with Enigma Records. With six solo albums to his credit--his latest, "Sand," has just come out on Relativity--Holdsworth today is regarded as one of the most innovative guitar whizzes.

Critics tend to lump Holdsworth in the "jazz-fusion" category, a designation with that makes him uncomfortable.

"To most people, jazz-fusion means this dreadful synthetic jazz-rock thing, this jazz-Muzak, which I detest," Holdsworth, 40, said. "They also think of jazz as a specific form of music, while to me it's just the opposite.

"Jazz is something that's constantly changing. Its sole purpose is to let people improvise, to let them solo differently each time they play. And that's always been what I like best."

On his last two albums, Holdsworth used a $10,000 "synthex [sic]," a computerized guitar tied into a synthesizer, for most of his improvising.

"Conventional guitar synthesizers are flawed because they convert pitch into digital," he said. "But the synthex is so accurate that there are no limits to the sounds I can produce, so I'm able to improvise more than I had ever thought possible."

Born in the Yorkshire region of England, Holdsworth learned to play guitar when he was 17. After working for several years as a basket maker, he decided to make a career in music. In 1968, he joined a London nightclub band.

By the early 1970s, however, Holdsworth had "outgrown the limitations of Top 40," so he began playing with various progressive rock bands.

"A lot of my older albums were probably quite valid at the time, but I can't stand to listen to them now," Holdsworth said. "Music moves forward so quickly; music is an accumulation of knowledge, and musicians keep getting better and better.

"I made most of my progress in the last few years, and that's why it's hard for me to listen to anything I made before then. My biggest goal is to continue growing musically.