guitaremag.com has published a homage to Allan Holdsworth by record producer Jean-Marie Salhani. It consists of a brief article written by Max Robin, and a video interview of Salhani, presumably also conducted by Robin.

Below you will find a translation of the article. The article translation is based on Google translate and quotes from the translated video, edited by the Allan Holdsworth Archives. Video translation by M.C., merci beaucoup! 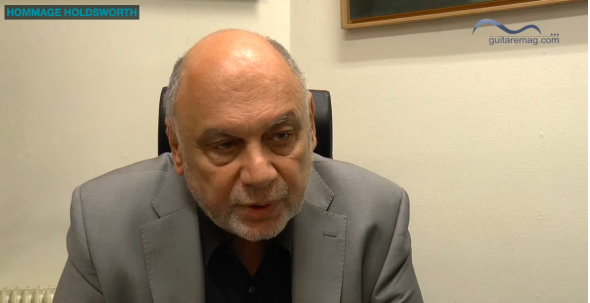 Guitarist guitarist Allan Holdsworth passed away on April 15th (2017). Born on August 6, 1946 in Bradford (England), the guitarist of Gong and Soft Machine, with his lyricism and his unique playing technique, focusing on the "legato" and generating an extreme fluidity of expression, was a source of inspiration and / or a major influence for many of the six-string talents, such as John McLaughlin, Steve Vai, John Scofield, Carlos Santana, Eddie Van Halen or Frank Zappa. Jean-Marie Salhani, producer of the album "The Things You See", recorded in duet with the pianist Gordon Beck in 1980, pays homage to him.

It is through Gordon Beck, who recorded the album "Sunbird", that Jean-Marie Salhani meets the guitarist. "I was surprised to see him arrive with a violin! "Says the producer. " He was a very shy person, very discreet ... In the evening, he began to speak ... We spent three days in the studio. It was pretty magical ... " The quartet brought together by the pianist (with Jean-François Jenny-Clark on bass and Aldo Romano on drums) then leaves on the road, on tour. "We had to make about thirty cities," Jean-Marie continues, "with the means at hand ... It was an unequaled period, I have never known that since. "

"When we start to know Allan, to get into his music”, explains Jean-Marie, “it's hard to get out of this spell ... It's someone you can not forget ... When I heard of his death I was shattered. I did not think he could die! As matter of fact, he's not dead because fortunately we can listen to his music forever”. Fascinated by another, Gordon and Allan then recorded "The Things You See" as a piano / guitar duet. The producer offered them an "acoustic" album, a challenge for Allan, confronted for the first time with this experience. "What they have recorded is, in my opinion, something very unique, quite exemplary," says Jean-Marie. In 1988, the two men came together for a second duo album ("With a Heart in My Song") in Los Angeles. Allan plays electric guitar and Synthaxe. "Allan was very introverted and at the same time very modest ... At home, he was much more relaxed and more comfortable on his court. He played "at home" ... But I think he was never as good as when he was in danger! ".

"All guitarists owe him something," Jean-Marie concludes. "He takes you forever!"

Transcript by M. C., editing and proofreading by the Allan Holdsworth Archives.

- We're here to pay a tribute to Allan Holdsworth who you've met as a producer, and you were introduced to him by the pianist Gordon Beck. Can you tell us how it was?

- It was very particular. I've already done a first solo album with Gordon Beck and he manifested the desire to record an album with a quartet. He wanted to play with Aldo Romano at the drums and Jean-François Jenny-Clark in the bass, and he had been talking about a guitar player, an alien, a British guitar player who had played with Soft Machine and Gong. I didn't know Allan Holdsworth. I then listen what he had done with Gong. I didn't find the album with Soft Machine at that time. I said yes of course, if you want to have that guitar player with you, and I saw him at the studio Acousti, I think it was late '79, December '79, for the recording of that record, entitled “Sunbird”.

I met Allan for the first time. He came in the studio with a violin. I was surprised to see him with a violin case, and he then came back down, because he had his guitars in the taxi. He also brought a little amp, very heavy, which I had never saw before, it was a Boogie. That brand was popular at the time. It was a small amp which weighed a lot. It needed the two of us to bring it upstairs.

He set up with Gordon and rehearsed for about 20 minutes, and then took the violin. He played on one track, he's playing the melody with the violin. He was a very shy person, very discreet.

In the evening he started to talk in a very surreal manner. We were in another world with J.F., Aldo, Gordon, and me. We spent 3 days in the studio. It was kind of magical because we were very focused on the recording all day long, and the evening it was a bit crazy! We laughed a lot. So we thought we could do a tour and we did for several months, the five of us... well no, six, because there was another person, who is dead now, he is name was Patrick Tandin. He worked at FIP at the time and he was with us as a road manager. He was also a bit surreal too, so there was a very creative atmosphere.

We did something like 30 towns, with what we had. Every night was a different show, none of them were similar. It was a very unique time, I didn't experience that since. Allan was a very special person once we know him and know his music, I have to say that it's difficult to get out of it. It's hard to get out of that mesmerizing feeling. I fully understand the musicians who are in love with his music, and his person. He's someone you can't forget, he's unforgettable. When I heard his passing, like the rest of us, I was crushed, obviously. I didn't think he could die. As matter of fact, he's not dead because fortunately we can listen to his music, every day, every week, every month, as you please we'll listen to him forever. He won't go away.

The Things You See

- So after this “Sunbird” experience, for it was that first album which led to your first encounter, there was another record which became a reference, a duo with Gordon Beck, which you produced.

- Absolutely, I produced this one, it's a duo. The relationship between Gordon Beck and Allan Holdsworth is a very special one, they were fascinated by each other. One by his inner and outer magic, a guitar player who compared to no one else but himself, with a singular originality and fluidity.

Gordon was fascinated by this unusual character, and Allan was fascinated by Gordon Beck because Gordon represented the culture of jazz, he had the knowledge of jazz. It was fascinating for Allan who wasn't a jazzman to begin with, he discovered it and was impregnated by it, but not in a scholarly way. He didn't really learn jazz, he explored it in his own way.

When Gordon convinced Allan to make a duo album he asked me my perspective, and I said, it's simple, it has to be an acoustic record. "Allan, do you agree to play acoustic guitar?" It was some kind of a challenge for him, he had never done a record with an acoustic and he said "okay, I'll play acoustic guitar". He prepared himself, and came with an Ibanez at the studio. He also had an electric one, but barely used it.

What they recorded is, in my view, one of a kind, absolutely outstanding. What you hear in that record is most of the time one take, very little editing. All tracks have at least two takes, but it was always the first one which was taken into account. The testimony was the first take. Maybe just one track had a couple of edits, but the rest came spontaneously and immediately.

I must confess that there are at least two tracks on that album, “Golden Lakes” and “Diminished Responsibility”, both composed by Allan, which are absolutely astonishing and wonderful. I must have listened to them hundred or two hundred times, at least! Each time is a rediscovery, absolutely magical. The two of them together is something that works.

With A Heart In My Song

We did a second album together afterwards, in L.A. entitled “With A Heart In My Song”. It's all electric. Allan no longer played acoustic guitar, he played electric guitar and Synthaxe. It was made at his home in L.A., he had one of the first home studio in which I could worked. He was much ahead of his time and already made his own studio in his house, he called it "The Brewery".

It has to be said that Allan was a big big fan of beer he had a great knowledge of beers from all around the world, and I think he could have been a great brewer. He also invented a pump to draft the beer. He patented it for a fortune, and didn't market it, because he realized he would have been in another world, and the business world wasn't his one. He was a musician to the bone, very focused on what he was doing, it was all that mattered.

- A few memories about this second album in duo, and the recording in his home studio? The evolution regarding the first one? What can you tell us?

- For the first one, the acoustic one, there was a constant modesty, a chastity, if I may say. Actually, Allan was very introverted, very modest. He sung on that album, a song called “At The Edge”, he asked everybody to leave the studio, so we left him alone. He did the recording by himself, he performed by himself, he didn't want us to see him sing. He has a very distinctive voice, very moving. For the other album however, at his home, he was much more at ease, he was on his ground. The first time was more uncomfortable and he was facing Gordon who was kind of monumental, as a jazz figure, whereas the other album, “With A Heart In My Song”, he was, like I said, on his own turf, so he was much more comfortable. Even though he is at his best, I think, when he was at risk, like in the first album “The Things You See”, he was never better than when he was in danger.

- So we can end by evoking the musician and the guitar player he was, in retrospect, how would place him within the guitar world?