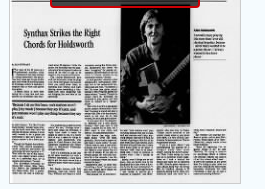 For most of his 23 years as a professional musician, Allan Holdsworth had been playing the wrong instrument: the guitar. Then four years ago, he got on the right track when he started playing the Synthaxe, which is basically a computer that is worn and played like a guitar.

"It seems funny to have been playing for a long time and then discover an instrument like this," he said recently. "It's like I've just found myself. I actually enjoy playing this much more than I ever did playing the guitar, because I never really wanted to be a guitar (he pronounces it 'gee-tar') player--I always wanted to be a horn player."

Though the English-born Holdsworth first played saxophone, health problems prevented his continuing. He took up guitar at 17. "Now with the use of this instrument I can employ breath control and, in a perverted way, try to become a horn player," he said.

The Synthaxe--invented by Britons Bill Aitken, Mike Dixon, Tony Sedivy, Ian Dampney and Ken Steel--looks like a guitar, except that the neck is tilted upward about 30 degrees. Unlike the guitar, the Synthaxe has two separate sets of six strings and makes no sound of its own--it has to be linked to one or more synthesizers.

The sounds Holdsworth gets with the instrument when he plugs it in--from wiry guitar-ish tones so thick you could chew them, to marimba-like effects and light dancing notes resembling a keyboard--are both delighting him and bringing him new fans at the same time.

"It's enabled me to open up more colors," he said. "Perhaps since I have been using the Synthaxe, it might have made it easier for people to listen to me, in a funny kind of way it takes for things to happen," said Holdsworth, who plays the Coach House in San Juan Capistrano tonight and the Palace Court in Hollywood Wednesday through Saturday.

"And it's interesting to see that as the same musician but with a different instrument, I have been able to get the music moved into a different place where more people like it."

But despite tenures with Soft Machine, Jean-Luc Ponty and Tony Williams and despite a solid reputation among his fellow players, Holdsworth the leader has been "struggling" for popular acceptance. One drawback is that his music is "intense, though it's not continually intense," he said.

A more germane obstacle is that Holdsworth's instrumental offerings live in the netherworld between jazz and rock. "In essence, I feel I'm more jazz guitar player because I write vehicles geared for improvisation," he said. Though he usually plays the Synthaxe, he continues to play guitar and still refers to himself as a "guitar" player.

"At the same time, I'm absolutely, definitely not a rock player, because I don't play rock 'n' roll music. I started out in rock, but I didn't want to stay there, and haven't," he added emphatically.

Still there's that edgy, rock-based sound. "Over the years, gradually, I have tried to improve it and make it more subtle," he said. "I have tried to take a rock-kind-of-sound and 'de-crude' it, if you will. Make it a nice sound. Yet, it's got lots of sustain: If you play an acoustic guitar, the note only sustains for a few seconds; I use the kind of technique where the sound sustains for days."

Holdsworth used to think that "straddling a fence" between jazz and rock "might have helped me reach a wider audience. "

Surely, even if things are up and down, they are better now in the Southland than they were in London for the 40-year-old plectrist. "I moved here four years ago because I was unable to survive as a musician in England," said Holdsworth, who now lives in Tustin. "Unless you're involved in the current music scene at any given time there, it's very difficult, particularly for jazz musicians. There's no jazz scene as such."

"It got to a point where I was contemplating not playing for a living--I would have never stopped playing for my own pleasure. Then I kept seeing my name pop up in American music magazines, so I took a kind-of last chance and came out to California in 1981. I found a great reaction--it was a shock going from the Green Man (in London), playing to 12 people, to selling out the Roxy. So I commuted back and forth for a while, then I realized I should just stay."

But whether he's playing Synthaxe or guitar, rock or jazz, Holdsworth, whose latest LP is "Send" (Relativity), simply wants to be a better musician.

"Since the beginning, I've set (goals), things to do," he said. "Basically, I'm trying to improve my knowledge. Music is endless and limitless. Nobody can learn it all, so I try to learn what I need . . . to serve my purpose at any given time. I'm trying to play tunes in a new way, using all the same scales, harmonies, structures, but twist everything a little bit so that it comes out sounding different."