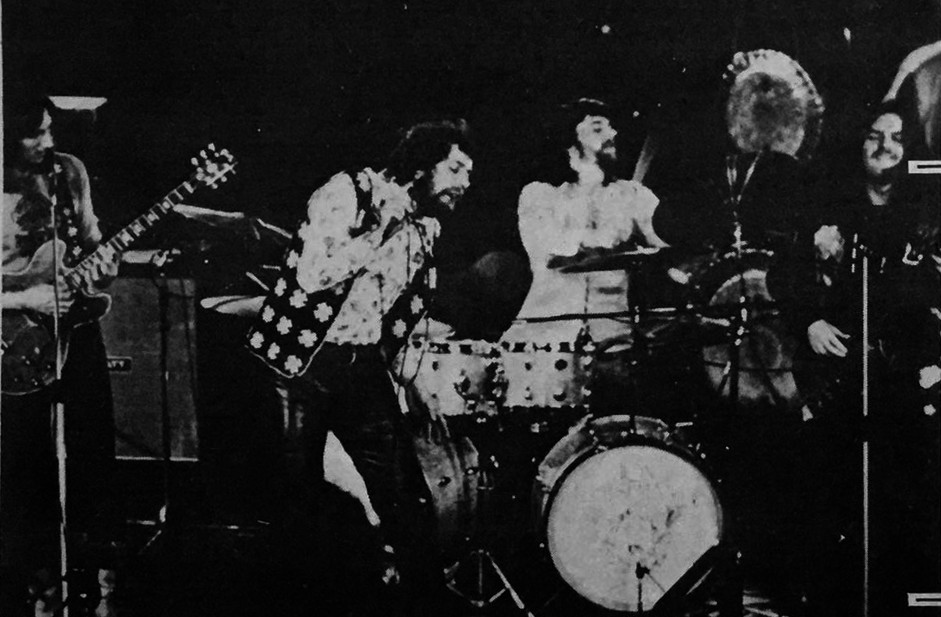 IT MUST be every musician's wildest fantasy to put a band together and, without ever showing their face in public, hit the eggs, beans 'n' grease trail clutching a fist-full of contracts redeemable on the night at well over four figures each.

These are precisely the circumstances which surround Tempest, the new road band skippered by drummer Jon Hiseman, who was in fact quite prepared to start all over again back out in the car-park.

"I would have preferred to begin at the bottom, instead of going out right away as bill-toppers," a perplexed but nevertheless amused Hiseman admitted on the eve of his band's European debut.

"I really can't work it out, because even before I'd finalised the line-up of Tempest, our office was inundated with offers for us to play the same halls as I did with Colosseum – but at a lot more money."

Which, I suppose, only goes to illustrate the goodwill that Colosseum - a band which on paper appeared to lack all the important requisites for stardom - built up on their many successful barnstorming sojourns throughout Europe.

Another reason for Hiseman's apparent reticence to premiere such a young and volatile band in - to paraphrase an American colloquialism - Europe's major "Moose Halls” derives from the immediate pressures any new band is subject to.

Putting the finger on Allan Holdsworth, Tempest's aspiring guitarist-cum-violinist, Hiseman discloses: "He's never been out on the road before and the pressures on him are quite colossal. Allan feels his responsibilities quite keenly."

"On the other hand," he continues, "Paul Williams (Tempest singer) is used to it simply because he's had experience working in such big halls, but only as a second on the bill attraction."

"Up until now, Paul's never had the responsibility of going on before such large audiences to close the show."

In no way does Hiseman intend to take the easy way out and capitalise on Colosseum's past glories. Indeed, it's only with the greatest reluctance that he's come to a compromise with promoters by allowing them to advertise his presence on gig posters.

Hiseman offers this declaration to those expecting a reincarnated aggregation: "If people come along expecting to hear Colosseum they'll be in for a bitter disappointment."

"If people want to hear the 'Valentyne Suite' again — and they're entitled to want — the best thing for them to do is stay at home and play the records, because they won't hear Tempest playing it."

"If I sang the 'Valentyne Suite', or played anything other than drums, maybe I'd consider re-adapting past material, but since I don't, there's no point."

"And I think, for that reason, European audiences are going to find it a little tough at first to get into what this band is endeavouring to do. As I said, if they expect Colosseum they'll be disappointed. I can only hope that they'll accept what we now do instead."

ONE REPEATED criticism levelled at Colosseum, and one that Hiseman agreed with, was that his now defunct crew were perhaps the definitive imageless rock band. Aside from the knowledge that Hiseman was in the driver's seat, the only visions that sprung to mind were the spectacle of Dick Heckstall-Smith's bald pate, a brace of shining saxophones crammed in his mouth, and the pasty-faced hulk of Chris Farlowe lurching like Frankenstein's creation in a fringed jacket.

Was this a pitfall that Tempest were keen to side-step?

"I never thought the artist was that much in control," was Hiseman's reply. "I honestly think that the media and the music itself creates the image. "

"I'm of the opinion that the more mature your audience, the less of an image they need to understand what you're doing. The younger the audience, the more stereotyped, the more compartmentalised it must be in order for it to mean anything."

"Actually, to be truthful," he concluded, "I really don't know what will happen with Tempest."

Tempest would have been ready for public inspection a few months earlier if contractual difficulties surrounding the signing of Paul Williams hadn't slowed them down.

So the recording of the first Tempest for Bronze had to go ahead with just Hiseman, Holdsworth and Mark Clarke (bass/keyboard/vocals) laying down the tracks.

Hiseman elaborates: "When I first formed Tempest I had the idea of using Mark, who had been bass player in Colosseum, as lead vocalist. In fact, during the last few months of Colosseum's existence, Mark was doing some lead vocal work and coming over strong.”

"When we came to recording this album, we did all the numbers with Mark's vocals, but then found that his voice was only really suitable for a couple of them. "

“We needed somebody a lot heavier, otherwise it would have held the band down in its range. Its full range would have only reached three-quarters of its potential, only because the quality of Mark's voice ... it's not heavy, but light."

"I figured we needed someone on top to push the band that extra little bit, and feature Mark where he's best needed. When Paul came into the band, he just took over the things he could do well."

With Williams fronting Tempest, Hiseman feels he has the catalyst to allow each member to expand their talents.

Of Williams, he declares: "Paul's one of the most underrated singers this country's ever produced, but he's never been heard in the right context. With Tempest, I feel he'll stand a lot of people on their ear 'oles."

In conclusion Hiseman reveals that his reason for staying silent during the last 12 months - simple. "I didn't do any interviews after Colosseum folded because that band had to stand on what it had achieved."

"For those fortunate enough to attend some of the superb gigs we did, that memory was the only real epitaph-along with, say, the live double album. "

"Colosseum must stand or fall not on what I say in retrospect, but on what was there. In the same way, this is how I feel about Tempest."