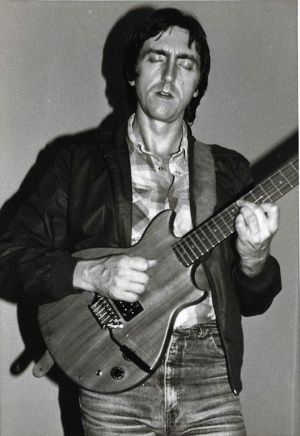 “Allan Holdsworth is, without a shadow of a doubt, one of the finest guitar players in the world. Even fellow guitarists (normally a very jealous bunch) are unanimous in their admiration of his skills. Players as diverse as Pat Metheny, Eddie Van Halen, and Carlos Santana all cite Holdsworth as one of their favorites.

Yet despite all of the praise from peers and outstanding reviews Holdsworth is one person who remains unconvinced. When asked about his unmistakably original guitar sound, Allan replied “It’s just a beginning of what I’m trying to get from the guitar. I really feel that I’m just at square one. My previous albums were just someone trying to find their way”.

Although he discounts his past, Holdsworth has an impressive list of recordings that few will close to equaling. He has played with Bruford, U.K., Soft Machine, Tony Williams, Jean-Luc Ponty, Tempest and Gong as well as recording two solo albums. All of these diverse recordings feature Allan’s stunningly inventive and fluid solos regardless of the rock, progressive, or jazz context.

Holdsworth is unconventional in both his approach and his philosophy of playing guitar. While conducting a workshop at Creative Strings Allan shocked the aspiring musicians in attendance by admitting that he doesn’t know how to read music. He felt that this has aided his improvisational style, since instead of worrying about which notes went with which chords he just used his own ear and determined for himself. This has resulted in chords that don’t exist in most textbooks, but that work in the context of Holdsworth’s eloquent musical vocabulary.

Allan has made major contributions to all of the bands that he has played with, but somehow they never satisfied him enough to cause him to stay. I asked Allan why he had moved around so often in his career. He answered, “It’s instinctive for me to want to move on. It’s seemed like people only wanted a certain part of me. Essentially I’d been asked to do a certain thing – play guitar solos. With Bruford, U.K., and Jean-Luc Ponty I never had the opportunity to contribute my own ideas. Finally the sheer frustration of only doing one thing got to me. I left in order to express the other parts of what I thought I could do”. He added almost apologetically, “I suppose that I was being totally selfish. I could have carried on as a guitar player and just done solos and no one would have known I could play a chord”.

One of the reasons why Holdsworth had felt stifled in U.K. and Bruford was because both bands had a thick keyboard sound. Allan felt that the “heavy dentures” (as he referred to keyboards) left him little rooms except for solos. “There wasn’t enough air in it for me. There was no space in the music. The keyboards were always filling up every available hole. It reminds me of the classic joke name for keyboard players, ‘Phil All-Gaps”, because that’s what it was like”.

While Allan was still in the Bruford band he rehearsed with a trio that included former Cream bassist Jack Bruce and drummer Jon Hiseman of Tempest and Colosseum. Although contractual obligations prevented this unit from ever recording, Holdsworth liked the format so much that he decided to leave Bruford and form his own trio. He found an excellent drummer in Gary Husband whose explosive playing proved to be a fine complement to Allan’s intensity. What he didn’t anticipate were the difficulties he would encounter in getting the record industry interested in his music. “I sent demo tapes of the trio to virtually every record company, but no one wanted to hear about it. At this point I found that I couldn’t support myself by playing music. I couldn’t get a record contract and no one wanted to book us for live gigs”.

Since Holdsworth’s progressive style of music was not fashionable his band was met with a general sense of apathy from the English public. “It ended up that it cost us money to play. Our expenses (sound system and all) cost more than we were paid. We’d go to a gig and have to say at the end “How much do we owe you to play?’. That’s where the name of the band, I.O.U., came from. It’s a perfect name”.

Lacking record company interest or money, Allan went ahead and recorded an album using borrowed funds. “I had to sell that white (Fender) Strat that I used in U.K. and Bruford in order to pay for the cost of mixing the album. I really loved that guitar – it broke my heart to sell it”.

Even with the master tapes of the excellent I.O.U. album completed, Allan could not find a record company willing to release it under any kind of reasonable terms. Disgusted with the music industry, Allan and the band decided to press the album on their own.

Allan ended up having to make a living by repairing amplifiers and modifying guitars. By January of 1982 he had been trying to get the trio concept to work for two years, and he was doubting himself due to the lack of success. He felt that he has “missed the boat” and was extremely close to the point of giving up playing altogether.

“I was prepared to tell my wife if I couldn’t do it in America I was going to give up music. I was offered a job at a guitar factory, and I’d rather do that than piss in the wind. I’d gotten tired of that. I would never stop playing for myself, but I was ready to give up recording. There was only one thing that kept me going. I couldn’t stand the thought of playing in some back room three or four years from now, playing six times better than I’ve played in my life, and have people talk about things that I’d done five years ago”.

This irony also applies to the I.O.U. album that represents Allan’s most recent and advanced music. “There are so many things that I’ve done in the past that I hate that anyone can go out and buy. I like this new album but (due to the lack of distribution) no one can buy it”.

In order to finance the American tour and pay off bills Allan sold nearly every piece of equipment that he ever owned. After three years of barely playing at all, Allan was amazed to find out that their first U.S. gigs had sold out the Roxy Theater in L.A. The overwhelmingly positive response and continued sellouts have rekindled Allan’s confidence in himself. “The people are what’s important – they’re so inspiring and encouraging. I feel that I’ve got a new lease on life and this tour has been the turning point”.

Allan’s Hartford date was a complete success as the band filled the unlikely confines of Cell Block Eleven in a concert sponsored by the Hartford Foundation for the Advancement of the Arts. In the year since they were recorded the songs from the I.O.U. album had been developed and expanded upon in ways that surpassed even the strong original versions. The band proved to be a sympathetic unit that meshed tightly in support of each other. Gary Husband’s exuberant drumming propelled Holdsworth’s fluid excursions. The sheer power generated by these two musicians created an intense energy that kept building and climbing. Fortunately the tension would release to allow the tunes to breath and the audience to catch their breath. Englishman Paul Williams (who had sung in the band Tempest with Allan) provided his muscular vocals on roughly half of the songs which gave them an additional dimension. The solid bass of Paul Carmichael blended with the delicate guitar chords and also provided a launching pad for Holdsworth’s improvisational flights.

Instead of displaying the usual guitar hero stage movements the unassuming Holdsworth takes a different approach. Closing his eyes, knitting his brow and gently swaying to the sound, his movements were largely confined to incredible fret hand configurations. Allan’s remarkably wide reach would take on the appearance of a nimble spider slithering up and down the fretboard. It was then that one realized how much freedom Allan had with the trio format, and how well he carried the responsibility of being the only melody instrument.

As Holdsworth said, “I had to do this – it was important for me to break away”. With his typical desire to continually progress Allan is now considering adding another member to the band – either a keyboard player or another guitarist. “I’d like to have someone who knows when to stop playing. I used to do this all the time, and I liked playing chords behind someone else’s solo. Due to the restrictions of the trio format I don’t have the opportunity to interact with another lead instrument, and I’d like that”.

For once the musical decisions are Allan’s, and he feels that his current band and album represent his best work to date. “It’s the first thing in my life that I’ve done that I’ve been close to in control of”. The next move is now up to a record company to offer Allan an acceptable contract. It is indeed a tribute to the shortsightedness of the music industry that a proven talent as great as Allan Holdsworth has been forced to record, finance, and release his own album.

The future looks extremely positive for Allan and I.O.U., especially in America. There is talk of a major record company signing the band, and they plan on returning for a second tour in the fall. Now that a crucial corner has been turned in his career we can all look forward to watching Allan establish himself as a potent musical force of the eighties.